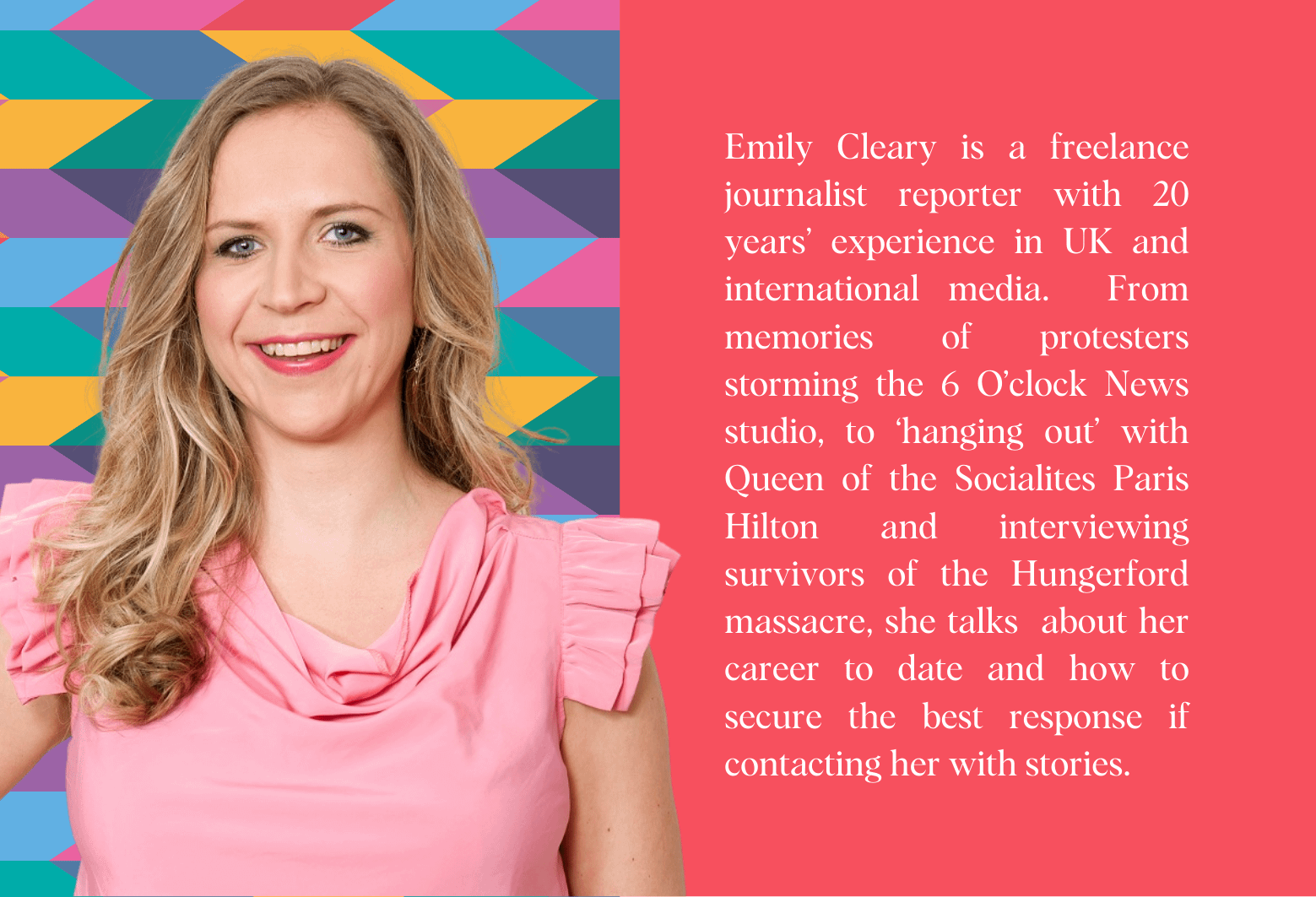 I was telling my kids this just the other day. It was probably when I was about six or seven.

I liked reading and writing and I remember watching the news a lot with my mum. I remember various stories, for example the day when Nicholas Witchell was reading the news and this protest group came into the studio and stormed the Six O’Clock News. That stuck in my mind.

And then the Michael Buerk report from Ethiopia that sparked all the famine appeals. My mum’s partner was actually a camera man for the BBC, so we got to see both sides – know what he was doing and then see the news on the telly. I liked that, but I never fancied being in front of a camera.

My passion has always been reading and writing. I wrote a lot when I was a child and always wanted to be a journalist. I went off on a few other ideas, but it came back to this.

How did you enter the profession (education/training etc)?

I fell into working in events after leaving university, but I knew I wanted to be a journalist and so I left my job and retrained with the National Council for the Training of Journalists (NCTJ). I did their intensive six-month programme and then applied for three different local newspaper jobs. I was offered all three of them, so I picked the Watford Observer which was nearest to me.

There are many different routes now, but at that time you had to have an NCTJ qualification and get your local newspaper grounding if you ever wanted to move on and I always knew I wanted to write for national newspapers.

I just kept plugging away. I worked hard and got a couple of lucky breaks with national stories and started doing shifts for national papers.

I was at the Watford Observer from August 2004 to February 2007 and ended up as Chief Reporter.

I went on to be Senior Reporter for a news agency, but I’d already been doing shifts for The Sun and The News of the World. I did 9 – 5.30pm at the Watford Observer then I’d drive over to Wapping and do 7pm until 3am at The Sun, then have an hour’s drive home, grab some sleep and then get up for the Watford Observer again!

I didn’t do this every day, just a couple of days a week. It obviously gave me a great grounding but didn’t allow much time for anything else!

I was at the news agency from March 2007 to July 2008 and after that I decided to go freelance. I already had shifts at The Sun, I was doing stuff for The News of the World, and I then started getting different contracts – two months here, three months there – with various magazines.

I remember this well as it was before I started at the Watford Observer! I managed to get a front-page story for my local newspaper The Uxbridge Gazette. Unfortunately for him, but fortunately for me, when I was doing my journalist training my boyfriend at the time got shot with a pellet gun. Someone just randomly shot at him, and it lodged in his arm, and he had to go to hospital.

I thought I’m going to write a story about this, and I got a front-page headline with a by-line before I’d even started! At the time, The Uxbridge Gazette was well read – about 20,000 which was then a lot for a local newspaper.

Because of the diversity of my stories, there’s favourites in terms of the most fun ones.

The most fun was when I flew out to LA and went to Paris Hilton’s house and sat by her pool lounging around whilst she got ready for about two hours. She was finally ready, and I went up to her room and interviewed her and then we went out shopping.

My poor boyfriend at the time – who’s now my husband – just had to sit in the car outside the house, although we did let him join us for the shopping!

Another time, which was quite bizarre, I had to go along Hollywood Boulevard and into celebrities’ restaurants before taking photographs of the toilets to see which celebrity had the best ones! That was just random and banal, but if you’re talking about fun then it was definitely that – ordering a lobster and then taking a photo of the toilet!

The hardest story, but one which I felt extremely proud to be part of, was when it was the 25th anniversary of the Hungerford massacre. That’s something else I remember from when I was a child. No one had ever heard of it before, but then you suddenly knew the town because of what happened there, and you knew the name Michael Ryan.

For the anniversary I was sent by the Daily Mail or Mail on Sunday to try and track down some survivors and talk to them about their story, how the town has changed, what impact it had and what’s happening in the town now.

I spent a couple of days there and knocked on a couple of doors in the road where he lived and this family invited me in, gave me tea and biscuits, and told me everything from the day. This is where we sat, this is what we heard, he went away and then came back again. You could see how much it was still with them. I get goosebumps even talking about it now and I felt proud to have been part of it. I wasn’t doing it in a sensationalist way, and they genuinely wanted to tell their story.

When lockdown first hit, I had to interview a couple of people who weren’t going to make it through. There was this one woman who was just so incredibly brave. She had eye cancer and had children a similar age to mine, and she knew that even with treatment she wouldn’t survive longer than six or nine months.

She just wanted to take her children to Legoland, but of course it wasn’t open. Speaking to someone one on one, and them being so positive, but being so unwell and just in the most awful situation, that really got to me, and I think writing up stories like that was the hardest thing I’ve done in a long time.

I was working for More magazine which is sadly no longer with us, and I had to go along to HMV in Oxford Street where Lady Gaga was doing a Q&A with journalists.

I think it was the first time she’d been to the UK and each journalist was allowed to ask one question. She was touring with Kanye West, and I was briefed by the magazine that I had to ask in one way or another if she was having a relationship with Kanye West.

You must get your question in before they cut you off, so I said: “It’s great to have you here with Kanye West, are you going to get it on?” She was very gracious, replying “I think you know I’m not going to answer that, but thanks for having the courage to ask it!”

Each day is completely different. If I’m doing a news shift, I’ll log on and get a card showing what stories I need to do. We’ll do about one story an hour, and this includes having to do all the SEO as well.

If I’m doing magazine features, then this will involve some research and also speaking to experts.

With two young kids, it’s often quite simply what I can fit in between the hours of 9 and 3!

Like a lot of people, since lockdown I’ve started exercising more. I did a triathlon last year and I’ve done a couple of half marathons.

Running helps with stories as it clears my mind. I have my phone with me, and I play around with intros in my head and write them down on my phone.

Don’t send attachments as I quite simply won’t open them!

You need to suggest a headline, or a couple of headlines, which will really grab my attention, and then a summary.

If it’s news, you must tell me the story in the first couple of lines. It must come across as a story, not just a press release.

Features wise, tell me the story. Suggest a headline and then give me four or five bullet points about what makes the story. If the point at the top is interesting, then I’ll read the rest.

For images, the best is a link to a drop box or an image bank. You don’t want lots of images which block your inbox, and you don’t want to have to get back to the company to request a certain type of image.

There are less journalists now and a lot more things to do – for example SEO – rather than just writing a story.

Most things can be done by email. I deliberately don’t give my phone number out as it’s my personal number and personal time. Of course, I’ll ring people back if I feel I need any other information.

The final thing to point out is that if I feel people are harassing me – for example contacting me to ask if I received the story, or if I’ve published it – then by principle it’ll make me less likely to use it.