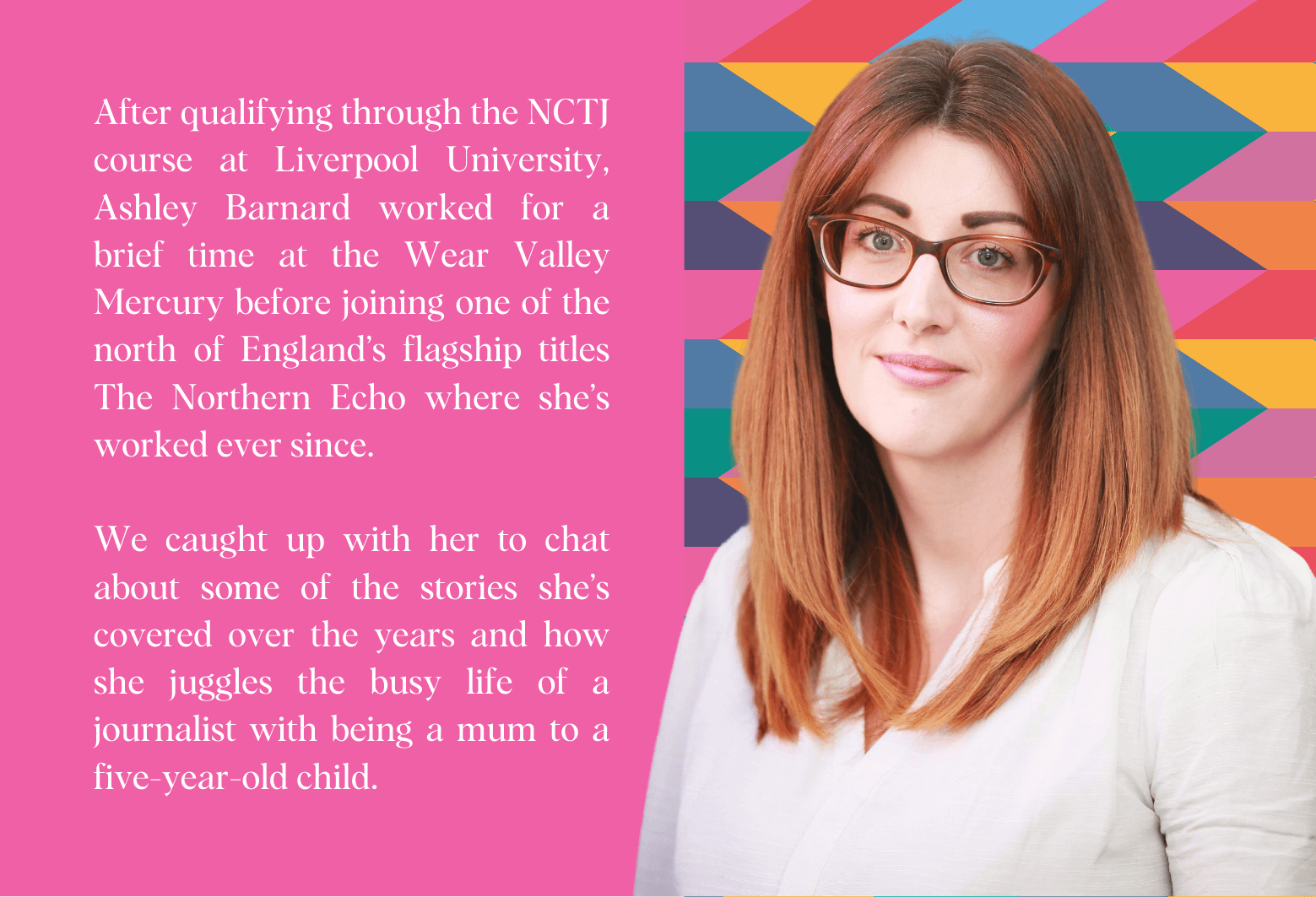 It wasn’t until after university. I didn’t really know what I wanted to do. I studied English Literature and Drama at Liverpool University and when I finished my degree, I thought I wanted to work in theatre.

The following year, I was travelling in Australia, and I ended up doing a little blog about the books I was reading, and it was just then that I thought, ‘Oh, I really like writing.’

I thought journalism would be fun because I also like speaking to people and finding out about them. So, I researched how to get into journalism and soon realised that the NCTJ was the route to go down and found a course in Liverpool which I enrolled on early in 2010.

After I received my NCTJ qualification I applied for a couple of jobs, but I think a lot of the places I applied to, even though they were small weeklies like The Ripon Gazette and The Whitby Gazette, wanted someone with more experience.

I did a few placements wherever I could. One of these was at The Wear Valley Mercury, based in Crook in County Durham. I ended up doing a full summer there pretty much full time, but again for free; and so I worked in a pub in the evenings just to get some money!

Whilst I was there, a vacancy came up and they just offered me the role. There was only me. I was the only reporter, and I was the editor as well – a real baptism of fire!

I did everything, and I loved it. However, a few months later the paper folded, and I was made redundant. Luckily, there were a few Northern Echo reporters on my ‘patch’ who I’d got to know by covering some of the same jobs as them. They told me to get in touch with their editor as he was always interested in looking for new reporters.

I thought it was just a casual chat, but I’d luckily taken my portfolio of work as it turned out to be quite a formal interview and he offered me a job! That was ten years ago. I soon settled in, and I’ve been there ever since.

It was a ‘death knock,’ a man who’d been quite a big member of his community in one of the Yorkshire Dales villages. He died, and so I had to cover that, which was terrifying.

But in the end, I got a really nice story actually, because loads of people wanted to say lovely things about him, so I was very proud of that once I’d done it.

So what about your favorite story? Do you have anything that sticks out?

Yes, absolutely. It’s nice covering stories where you feel like you’re helping people. There are lots of these, but I remember one in particular which was quite an unusual story as well.

It was kind of a running story for a little while because I kept working with this lady. She got in touch with us to tell us her story about when in the 1990s she was living in Spain and Billy her baby, died while she was in hospital.

Years later down the line, doing various investigations, she believed that her baby had been stolen and trafficked. It sounds unbelievable, but I worked with her a lot with all the evidence she had and I completely believed her.

She got a lot of support from the Government and spoke about her story in parliament. Apparently, this sort of thing was going on in Spain a lot in the nineties. It was a really big,  emotional, proper human interest story. And telling it kind of helped her a little bit along the way, which made me feel good.

And now, what’s the most difficult story you’ve worked on?

I always remember the sad stories. One was a tragic one about a three-year-old who was knocked down and killed. This was obviously an extremely harrowing story.

Even though it developed into a campaign for speed restrictions on the road, which were later approved by the local council, I’ll never forget how difficult the original story was.

I’m sure as a journalist you get to meet lots of different people. Who’s the most famous person you’ve interviewed?

Oh, let’s have a think. Celebrity interviews haven’t really been in my remit. Probably the most famous people I can think of are the comedian Bill Bailey and the singer Lemar.

Well, I work three days a week to fit in with my five-year-old son. On Wednesdays and Thursdays I tend to go into the office, which I really like now because it was getting a bit much for me being at home all the time. I like interaction with humans.

I often work from home on Fridays. I like to get most of my work done on Wednesdays and Thursdays and so, if need be, I can be slightly more flexible on Fridays. The company has been great with flexibility for childcare and stuff, so it’s worked out well for me.

I’ve always been very creative, and I’ve recently got involved in a creative writing group. I also enjoy needlework.

Apart from that, just the usual family stuff. We’ve got two dogs and we love spending time outdoors walking in the Yorkshire Dales.

What’s the best way for people to contact you?

I’d probably say email, so you can be sure I get it. I do have a work mobile phone, but not many people have the number! Quite a lot of people send me regular content on a Monday or Tuesday and then it’s sitting waiting for me to work on when I go into the office on Wednesday.

What’s the best advice you can give to people submitting news stories?

Most of my work is community-based and so I’m always looking for news about things that are happening in the community and human interest stories. The most important thing is to make sure the stories are relevant and of interest to our readers.

My community content pages are focused on schools, charities, and individual groups and charities. I’m always interested in hearing about what’s going on at the heart of the community.

And then pictures are very important as these can often make a story. These should be good quality and high-resolution, but with the quality of mobile phones these days, that shouldn’t be a problem for anyone to submit.

We do have one staff photographer, but we’ve got a huge patch covering County Durham, across Teesside, Darlington, and the whole of North Yorkshire. So, she can’t be everywhere! We always welcome pictures submitted by our readers.